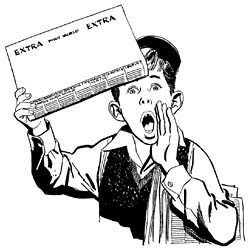 (NOTE: a couple of newspaper links are being flakey. If you cannot connect, you can find the articles through Google News.

Monday the Evan B. Donaldson Adoption Institute issued For the Records: Restoring a Right to Adult Adoptees, a “comprehensive study” on US adopted persons’ right to access their original birth certificates and other identifying information, a right systematically stripped from us during the McCarthy Era.

The report is a conservative document with nothing new for Bastards to chew on though newbies and the public may find it useful. It advocates “rights” but unfortunately continues to address sealed birth records as a “personal” not a class and political problem. It conflates the absolute right to acquire our own government- confiscated records and information with the personal desire of search, reunion, and “medical history.” These internal contradictions mitigate our rights while validating opposition arguments and deformer compromise “solutions” to OBC access.

That doesn’t mean the report gets it all wrong. Bastard Nation’s rights-based arguments for unrestricted access appear in the report. And we are certainly pleased that the Adoption Institute calls for the restoration of birth certificate access for all adult adoptees throughout the US. The report refutes dearly-held opposition lies that uppity ungrateful bastards with their selfish claims to rights and identity cause abortions and violate “privacy rights” of first parents, especially mothers. There are some useful stats. Most important, the report has generated substantial media interest. As of this writing there are over 230 Google News hits on the report, many of them linked to AP reporter David Crary’s article which went out on the wire Sunday night. Internet forums, chat rooms, email lists are buzzing; bloggers are blogging; and adopted persons are speaking up. If we act immediately, we can utilize this interest to expose state-facilitated identity stripping, the violation of adoptee civil rights by adoptacrats, social engineers, and politicians—and press for our records, especially in states with clean pending legislation.

I have seen no serious response to the report from the National Council for Adoption (only a weird comment on abortion rates in the Pittsburgh Post-Gazette), except for Tom Atwood’s Tuesday appearance on NPR’s Talk of the Nation with Adoption Institute director Adam Pertman. And what an aggravating show it was! It should have been billed The Battle of the Adopter Dads or The Battle of the Adoptacrats since both men are adopters who run “adoption advocacy organizations” opposed to each other philosophically, except when they are joined at the hip. Like when they want to shut up Masha Allen (Daily Bastardette, Nov. 29, 2005) or pull Who’s Your Daddy? (Daily Bastardette July 22, 2005) from the Fox lineup to “save adoption.” From what? Sexually abused dime-dropping pre-teen international adoptees? Pissed off, politically active adult adoptees? Reality TV?

Atwood  got the vapors over “mandatory openness,” portraying adoptees as degenerate stalkers out to wreck the lives of “courageous birthparents.” He forgot to mention that NCFA was formed in 1980 by Texas oil money and private adoption businesses as a brass knuckle dragging trade lobby to keep original birth certificates sealed, first parents in the closet, and adopted adults and their identities state chattel.

Pertman  wasn’t any better. Although the report contains no mention of compromises, as soon as Atwood hit him with bad case “reunion” scenarios, Pertman retreated with a laundry list of compromise alternatives, including contact vetoes (at least that’s what it sounded like in the muddle) to save first families from bastards behaving badly. Among his suggestions, of all things, was a national adoption reunion registry, a proposition scoffed at by even the most rabid Do-Bee deformer. I thought for a moment he was sticking it to Atwood since NCFA opposes a national registry but promotes state registries. Don’t ask! Adoptaphrenia is a hallmark of adoption. Putting the finishing touches on this blog, I re-played the show to see if I’d missed something. I didn’t. The civil rights of adoptees was discussed as much as Exene Cervanka’s influence on Amy Winehouse. (See Baby Love Child for an amazing reconstruction and analysis of the adopta-event: Adam Pertman, Please Shut Up!) 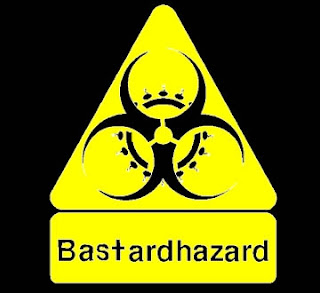 OF COURSE NOBODY ASKED US WHAT WE THOUGHT
To no one’s surprise adopted persons (and their first mothers and fathers who everybody pretends to care about) were banished to the children’s table. We were not invited on the show except as callers and internet commenters. Even adoptees that managed to get a word in were censored by producers. Cathy Robishaw, instrumental in this year’s overturn of Maine’s sealed records law, writes on the Internet forum AdoptedAdults.net that she was coached by a producer to discuss her personal story only. When she behaved badly, going off-script to discuss rights and ask Atwood why he feels compelled to speak in her name about hers, she was cut off. Ron Morgan was summarily dismissed by a producer who told him that there was a pile-up of calls from those who wanted to make similar points as he. Why sweat it anyway, BB Baby? Adoptee rights is a shoe-in according to the Talk of the Nation crack production team.

IF IT SAVES JUST ONE!
The reaction of adoptacrats nationwide who fear autonomous adoptees as much as they fear the soup kitchen they’ll find themselves in when birth records are opened, has been quite amusing. Take Marlene Lao-Collins, an apparatchik for the New Jersey Catholic Conference who never met an adoptee whose picture doesn’t belong on the post office wall. According to the Crary article, Ms Lao-Collins claims that even though she has no data to support her “fact” that adoptee OBC ownership causes women to run to the neighborhood abortitorium to excise their dirty little secrets from the town gossip mill, “even if it happened once, that would be one too many.” Where have we heard that before?

Self-proclaimed Michigan Child & Family adoption expert Dawn Mead argues that it’s the government’s duty to protect people from getting their feelings hurt. (Can I prosecute my boyfriend when he tells me I need to lose weight?) She tells WLNS-TV News: “An adoptee can find their birth parents and the birth parents don’t want anything to do with them and then that child is devastated more than once” (Oh-oh! What’s the first devastation? The loving adoption option?)… “Even if there’s only a handful of them (reunions) and they become disastrous, that’s a handful we don’t need to have.”

And remember the Washington State ACLU—the folks who told Bastard Nation 10 years ago that nobody over the age of 18 needs a birth certificate; that they’d support a bill that seals all birth certificates from their owners? According to W-ACLU spokesperson Bill Honig, “When parents gave their children for adoption under a promise that the name would not be disclosed, we believe that promise should be honored. Otherwise we think that people should have access to that information.” Huh? Bill, read Doe v Sundquist and check back with us.

And, don’t’ get Bastardette started on Freepers! Here’s my favorite (emphasis mine) (no direct link. Go to “blogs” and type in “adoption” for Crary article threat. This comment is on the last page) :

This is the left’s attempt to shut down the only viable alternative to abortion. Changing this policy/law would have a chilling effect on parents deciding to put their babies up for adoption. I’m an adoptive parent, and I was told pointedly that our daughter wouldn’t be here today if it weren’t the case. To all adopted children: Just thank God you weren’t hoovered out of your brave mother’s womb and get on with your life. It’s really, none of the child’s business. Sounds cruel, but as long as society welcomes abortion over adoption, that’s the deal. If public opinion shifts, and adoption becomes the ‘global warming’ type trend of the next few years, then you can contemplate changes. 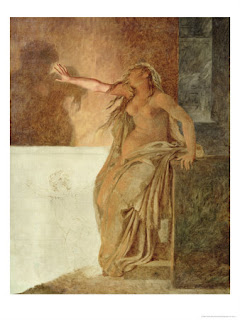 For the Records: Restoring a Right to Adult Adoptees is a missed opportunity. The Adoption Institute could have argued birth certificate access strictly as a rights issue. While it is impossible to disregard personal issues such as “reunion” or “medical history,” it could have dismissed these understandable and legitimate desires as irrelevant to the absolute legal right of everyone, including all adopted folks, if they want, to their own personal information without the interference of the nanny state. After all, no one (except the W-ACLU) seriously argues that the not-adopted don’t have a perfect legal right to go down to the health department or vital stats, plunk down a few dollars and walk away with their birth certificate.

The ultimate question then is who benefits from these contradictions. Certainly not us! I believe that the Evan B Donaldson Adoption Institute and Adam Pertman are well-intentioned and capable of good work. We’ve seen it in the past. But like the National Council for Adoption and Tom Atwood they represent adoption industry interests. Neither are activist organizations and neither are interested in digging out adoption abuse at its root. One promotes policy tweaks; the other the status quo. 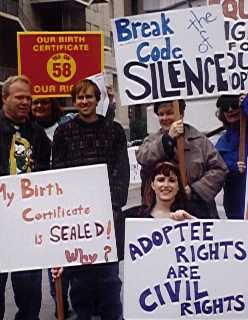 WE OWN IT!
This means it’s up to us to control what comes down. The unintended consequences of fuzzy thinking are obvious. Cut and paste a few phrases from a study; a few muddled public comments by “the professional adoption class” and we’ve got a big problem on our hands. Keep a clear and simple message without apology and we win. We’ve already proved that in Oregon, Alabama, New Hampshire, and Maine. Who’s Next? Your state?

DO NOT SHUT UP!
Do a Google search and check your hometown newspapers and TV stations for reports on the study. Hit the keyboards, faxes, and phones. Email comments, call reporters, send letters to the editor. Blog. Ask your media to cover adoptee rights with a local angle. Who knows adoption better than you? Offer your expertise to reporters and friendly legislators. Join Bastard Nation or other groups that support equal access with no restriction to birth certificates. Come to New Orleans with us next July for a Day of Adoptee Protest. Take back your records! Take back your identity!

*****
The Evan B Donaldson Adoption Institute is holding a “strategy meeting” for adoptee rights advocates and wonks in New York in December. We know what wins and Bastard Nation will be there. BN will present a more detailed critique of the Adoption Institute report and the reaction to it, along with successful strategies for records restoration for that meeting. It will be posted on the BN website close to the date of the meeting.Photos: Bastardette with Tom Atwood, May 2006, Alexandria, Virginia Bastardette with Adam Pertman, January 2005, Augusta Maine
BastardHazard: Fred Nicora

9 Replies to “FOR THE RECORDS: A MISSED OPPORTUNITY”