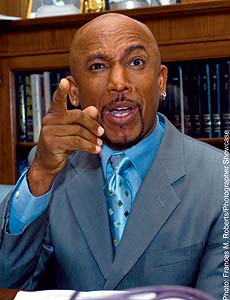 Blogger Fauxclaud taped the Montel Williams Show the other day. Her venture into the talk-o-sphere, where she attempted–and I emphasize attempted–to hold a cogent discussion on the pathetic state of contemporary adoption can be found in her Musings of the Lame, Montel, Not the Great Hope at All (January 12, 2007).

Since I don’t want to spoil Claud‘s story, I won’t comment other than to say that Claud’s experience with Montel mirrors my own time in hell with John Walsh. The only difference is that Claud received a $25 per diem, and a free Montel t-shirt and hat for having the forethought to leave her baseball bat at home, while I received a $60 per diem and got to pose backstage for a picture with Walsh after the show. Thankfully, John Walsh didn’t demand of me “How can I get a baby?”

Welcome, Claud, to the Sacred Hall of Adoption Media Martyrs! Patsies, set-ups, fools, naifs, suckers, and rubes all. It’s not like we don’t know that the talk show circuit is a big fat-ass circus that we should take as seriously as Paris Hilton’s 2006 abstinence pledge. For some inexplicable reason, though, we are old fashioned. We are moths. We maintain an odd belief in the democracy of the air waves. We pretend that by letting rich talk shows hosts turn us into shills for things nobody wants we will win a nameless audience to our side–or at least “educate” them. Do we really believe that the politicians who screw with us spend their days watching talk TV? The politics of our grievance effects are our brains. No hope is too high. No humiliation is too great. Maybe we have transcended our egos. Perhaps our self-esteem is so low that its residing in Badwater, Basin, California. Maybe we are all narcissistic potential Oprahs… if we can save just one… Strangely, those on the other side, ie., our enemies, suffer from the same feeling of helplessness when the camera rolls. Ambush! Hijack! Unfair! glide from their lips. We are all dupes.

You did your best and we thank you. I don’t want to patronize, but you may have done better than you think you did. Don’t quit. I know I won’t. Hope springs eternal! 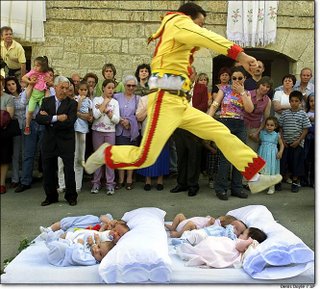 Be scared, Claud! Be very scared! Since my appearance on the John Walsh Show I’ve developed a peculiar affinity to Maury’s Who’s the Daddy guests.

No word on Claud’s air date yet.