The US House of Representatives!

Now that’s a big chunk of Adoption, Inc to chew on.  While we were pulling for our own nominee (Adam Pertman) we couldn’t  be more pleased with this august body of hacks, crooks, sycophants, boodlers, and hypocrites has taken the grand prize this year. I mean, is there anybody who likes these people?

The House-Session 112 was Demonized ostensibly for its overwhelming support and promotion of HR   1464 popularly known as tne North Korean Refugee Adoption Act of 2011.    I admit I’ve not followed this bill as closely as I should, so  I’m going to nick some information from Pound Pup Legacy: (from link above).

In a devastating analysis of this bill, Catherine Hong makes the following observation:

Modeled on a failed series of North Korean human rights bills that stretch back to 2003, the North Korean Refugee Adoption Act of 2011 proceeds from an outdated portrait of on-the-ground conditions and distorted premises. Empirically speaking, the bill misrepresents the reality of the children whom it purports to help. As a placeholder for children who are, by and large, not North Korean, not refugees, and not orphans, the “North Korean refugee orphan” is a dangerous fiction whose elastic license with the truth imperils the welfare of the children this legislation stands to impact. The bill’s alarmist image of “thousands of North Korean children [who] are threatened with starvation or disease” does not, in point of fact, correspond to the reality of the children who—albeit often poor and sometimes in the care of a grandparent—actually have families, have household registration papers, attend schools, are relatively well-nourished, and are Chinese citizens. Strategically loose on the supply-side details, this bill risks instrumentally construing these children as adoptable when, in fact, they are not. Far from ensuring the best interests of the child, as specified by international protocols, including the Hague Adoption Convention to which the United States is signatory, the North Korean Refugee Adoption Act, if passed, will give legitimacy to practices that shift U.S. adoption policy toward child-laundering. 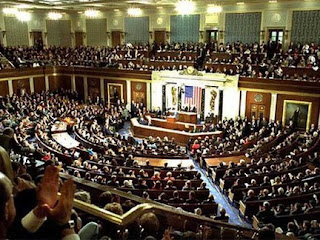 A minute ago I said the House won ostensibly  because of HR 1464, but the fact is, the House, the Senate–the whole US government and the media-centric,over-stuffed  Congressional; Coalition; on Adoption politicians– prefer form over  substance and adoption industry-dollar-driven “best interest of the child” over the genuine rights of the child.”

Neils and Kerry at Pound  Pup Legacy have much more to say about this year’s Demons selection to which I’ll add….

When I first saw that the House had been nominated I had my doubts, preferring a “regular” industry day-to-day player over the state. I’ve changed my mind. Adoptacrats always deserve to be outed as Demons. The contemporary state, however, consists of  a myriad of special (usually) commercial  interests that pretend to represent, support, and “save” its constituent groups. Adoption Inc is the perfect example of this seamless partnership of state and corporation at its most intimate.