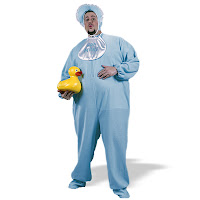 Some paps will go to any lengths to make their little wish come true. Take this woman, for instance, featured in today’s OSU Lantern.

A blind man alleges that someone has fraudulently used his name to apply for a mortgage, credit cards and food stamps, and may even have attempted to legally adopt him.

According to reports, the 26-year-old Columbus resident says a woman who lives behind a Morse Road WalMart applied for the credit between Sept. 1, 2009, and Sunday. He says that the woman may have attempted to obtain power of attorney over him and possibly attempted to adopt him.

Police referred the man to the fraud unit of Columbus Police.

I suppose the scenario would be for the woman to “adopt” her neighbor through some kind of wayback dated forged paperwork (something she dreamed up watching the The Hallmark Channel’s Adoption show while smoking crack), get his POA, and go to town on his bank account. Ohio allows adult adoption, but I’m still trying to figure out how to adopt a 26-year old man against his will. I thought only babies were allowed to get that railroad.

One Reply to “COWTOWN ADOPTION SCAM”