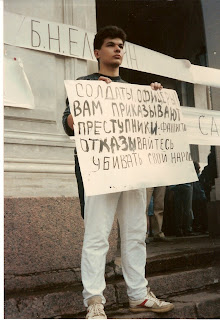 WARNING: This has nothing to with adoption. Today is the 17th anniversary of the collapse of the Soviet Union–the failed coup.

I began visiting the Soviet Union in 1988. I returned in 1989, and twice in 1990. In 1991 I had my first extended visit. That year I lived at Plekhanova, the international student hostel at the Herzen Institute, located just off Nevsky behind Kazansky Sabor Ostensibly, I was there to study Russian. Wiithin less than 24 hours of my arrival my good intentions were out the window. My time was taken up with shopping, sitting in the bar, Soier, clubbing, riding the metro, tattoos partying all night, …and as it turned out, overthrowing the government. Sort of.

Below are some pictures from that time. The first batch are my Plekhonova homies: Soier, Sveta, Pasha, Dima, Viktor, Alex, Valera, Radina Yan, Vika, Mary, Karin, and Vladek. The second batch are of the Leningrad “resistance.” Let’s just say we weren’t Moscow!

Following the pictures are two of my favorite Russian music videos: Zveri (Animals) by Tequillajazz and Sweet Home Alabama by The Leningrad Cowboys & The Red Army Choir. 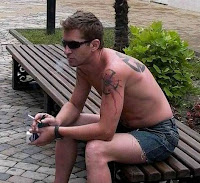 THE LENINGRAD COWBOYS AND THE RED ARMY CHOIR