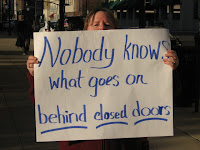 Yesterday at rush hour, I stood at the corner of Broad and Front Streets holding a sign

Nobody knows what goes on behind closed doors.
No, this was not about adoption, but it was about secrecy in government. No government can thrive without it.
Yesterday was about keeping Columbus City Council meetings open to the public.
Ohio’s Open Records and Open Meetings Law, collectively known as the Sunshine Law, is one of the best in the country. You can read about it and download here. It has numerous loopholes, most so tiny a gnat can barely fly through. That is, except for the dinosaur-sized adoptee birth certificate exemption, which even the most bleeding heart liberal thinks is hunky dory if it saves just one brave mother from being exposed to her neighbors by her thoughtless bastard.
Another big loophole is the executive session where City Council is allowed to go behind closed doors to discuss “sensitive issues” away from public eyes and ears. Sensitive issues like personnel, property purchase, litigation, collective bargaining, security matters–that is, where money deals are cut. political appointments made. and tax payer money is squandered on privilege. In theory these meetings are rare. But in practice… 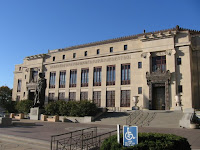 While the nearly 100 year old Columbus City Charter forbids executive sessions and secret meetings, City Council has been holding them for years as allowed by Ohio’s Sunshine Law. Confused? You’re not alone!

Columbus is a one cow town, a post industrial enterprise run currently by corporate Democrats. It is a wholly owned subsidiary of Limited Brands/The Limited, Victoria’s Secret; The Wolfe Family/Columbus Dispatch and other Wolfe media; Nationwide Insurance; and lesser assorted moneybaggers. Our mayor is a Democrat and all City Council members are Dems. Occasionally a Republican slips through, but local Reps in the main are fat, lazy, and seldom put up a serious fight as long as they’re thrown some ground level pickin’s.
But wait! There’s more! For the last decade and a half every City Council member has been appointed to city council by…city council…vetted in executive session. Only later, after freshman members serve out their appointments are they thrown to the electorate for approval.
But wait! There’s more! All council members are appointed/elected “at large.” That is, there’s nobody to represent you, no one is responsible to you. The buck can’t stop. City Council is a haven for ruling class cronies, and you’re not one of them. 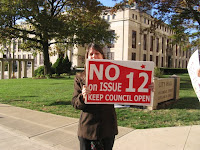 I imagine our laughable “neighborhood commissions” are supposed to pick up the slack. I’ve lived 21 of my 31 years in Columbus in the University District and I have never received a single mailing or door-to-door flyer from the University Area Commission that I can remember. When I lived in German Village, I received a few. Mostly these commissions” are operated by fallen Progs, fake liberals, and a few do-gooders who busy themselves with mundane and annoying issues, like citing old ladies for peeling porch paint or holding hearings on speed bumps. My neighbor received a complaint, with threat of summons, from the University Area Commission for keeping a canoe at the side of his house. No, this is not a gated community. This is the Ohio State University area in desperate need of better lighting, sidewalks, and less crack dealers. Some neighborhood commission members, if they game it right, go on to bigger jobs, like City Council or the Board of Education.
But I digress…
For nearly 100 years Columbus City Council by law has held all business before the public (well, that’s what they claim), except when it comes to the Sunshine Law executive session loophole and whim and the secret vetting of council appointees and cutting deals for tax abatements and other big donor shenanigans. So what if it violates the City Charter. See, according secret meeting pushers, only “good deals” out of sight of the insensitive and cloddish public, can be made behind closed door. It’s for our good that we don’t know what’s going on. In 2007. Republicans showing a rare moment of ball growth. complained that council was breaking the Charter, and threatened legal action–but only because they weren’t the ones sitting on council cutting the deals.
This brings us to Measure 12, on the ballot today, the only way City Council can legally upend the City Charter and officially align the city with so-called state law, which to be honest, nobody cares about. The city’s fat cats hope the public will cluelessly vote themselves out of the council chamber and into the street. As I write this tonight it looks like that’s what’s happening. But let’s not blame it all on voters. 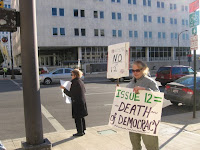 Measure 12 shines with Orwellian brilliance:
Shall Section 8 of the charter of the city of Columbus be amended to permit council or its committees to convene in the same manner as the general law of Ohio pertaining to open meetings of public bodies when discussing issues such as personal, matters, purchase of property ligation, collective bargaining, and security matters as recommended by the Charter Review Committee.”
The Dispatch editorial board crowed in response:
City charter change would provide public with more information
How secret meetings promote public disclosure wasn’t explained. You’d think it was nothing but a housekeeping measure to bring City Council under state compliance.
Fat cat downtown lawyer Larry James who helped draft the measure got it., though. He told The Other Paper that he “cringed” at the word “closed.”
If you say “closed” people think that you’re closing the public out. So they would vote against it.” 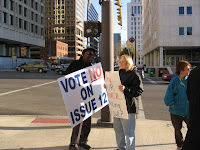 The measure is pimped, of course, by the Dispatch and something called Columbus Citizens for Good Government. The title alone should put you on red alert. Since I’m writing this by the seat of my pants for NaBloPoMo, I don’t have the time to look up who is on the committee. (If I find out later, I’ll add their names here). Among the committee’s outlandish arguments spewed forth is that of Homeland Security. See, City Council must meet in secret session during an Al Qaeda attack or other emergency. I’m not making this up. As Bob Fitrakis, publisher of the Columbus Free Press and a member of Keep Council Open opposition writes in Issue 12 – A Mockery of a sham: Orwell rolls in his grave, his pre-election wrap-up of the campaign:
The City has a Public Safety Director and a Chief of Police, and various joint task forces with other security and police agencies. The last thing that will happen in the case of an actual emergency will be calling of parttime City Council people into an emergency session. Both federal and state emergency management agencies working with fulltime professional public safety appointees of the Mayor will handle the issue. 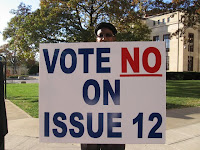 Acording to Suburban News outlets and other sources, Limited Brands has thrown $10,000 the committee’s way, and Nationwide Insurance another $5,000. Other moneybaggers have tossed in enough to fund the campaign for $32,500. The Limited, according to Fitrakis, was the chief beneficiary of public monies of the demolition of the downtown City Center Mall
Besides the Dispatch endorsement, Citizens for Good Government (which doesn’t seem to have any real people citizens) snagged the endorsement of the Franklin County Democratic Party. It also claims four or five neighborhood co-chairs and 100-200 “volunteers.” who do…what? Rank and file Demos and even some City Council members have voiced opposition (Charlita Tavares in particular). Even Mayor Mike Coleman has given only a lukewarm endorsement. 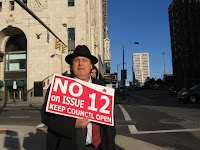 Bob Fitrakis (right dressed as Jake Blues ) has covered this whole mess for the Free Press and writes what’s really going on. There’s a lot, but this is the most pertinent to me:
The real reason Mentel (city council president) wants to go behind closed doors is to talk about giving rich corporate entities and major donors tax breaks or tax increment financing that allows a private entity to keep the tax dollars they pay for improving their property. It is much easier to come up with schemes to give away subsidies in the form of infrastructure development or tax breaks if the pesky public is not around.
I need to bring this back to adoption for closing. What’s happening in Columbus public meetings today is not unlike what’s happening in adoption deform. Special money and special interests locking out those most affected. Secret making and secret keeping for “your own good.” Convoluted language. A willing, clueless public that wants to believe that the government has our or your best interests at heart. We are not fighting in a vacuum. Corruption and big money are all around us, and we need to keep exposing it and ridiculing it, and killing it. We have few friends and the public doesn’t care as long as it’s lied to and taken care of.
Addenda: As I wrote last night, Issue 12 was passed by a whopping 63% of the voters who either don’t care or were confused by the wording of the measure. As of this writing there are 24 comments on the Dispatch article, with three writers saying they voted Yes, when they thought they were voting against it. Not unlike Illinois leggies who thought they were voting for a restoration of adoptee rights in that state while they were in fact voting for more state control to original birth control access.
Advocates of Issue 12 said it would enhance accountability and provide the council with opportunities to frankly discuss sensitive matters.
Welcome to 1984 all over again.
(Sorry about font changes. I can’t get them corrected)