According to the June 30 Lodi News article, Mother safely, legally abandoned baby at Lodi Memorial that “rare” instance has reached epidemic proportion in California. Since the law went into effect in 2001, 348 newborns had been dumped anonymously on the state for their own good by parents who love their babies so much they’ll kill them if they can’t drop them on an ER counter with no shame, no blame, no name or molestation by pesky cops and courts.

This article and a TV report from KCRA-TV , Mom: I can’t afford to raise baby give us some random stats for the state: 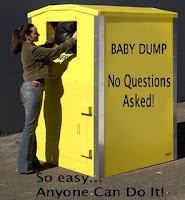 The LA Times reported on July 6 in Mother surrenders newborn son at ER in Glendale, that since 2002, 79 newborns have been “saved” in LA County. Deanne Tilton Durfee, executive director of the Los Angeles Inter-Agency Council, waxed poetic about the Glendale dump: The word needs to be out there that there is a recourse, there is a resource. What next? Baby Safe Haven Rap?

As for the Lodi mom. We know that she is 28 years old, gave birth at the hospital, is the mother of two other children, and “could not afford to keep her baby.” A KCRA-TV reporter covering the story calls that dump a “happy ending.” There is no mention if Lodi Memorial staff bothered to discuss ways to help the mother keep her family in tact. But then, this has never been about family preservation or even ethical child welfare and placement. It’s culling the herd of the poor, the uninformed, and the scared. Another eugenics experiment on people who don’t count.

348 babies proves that baby dumping is now a normal alternative to ethical child relinquishment. And that “safe haven” has moved from emergency child custody procedure to a cure for poverty.

5 Replies to “Build It and They Will Come: California’s Safe Haven Epidemic”