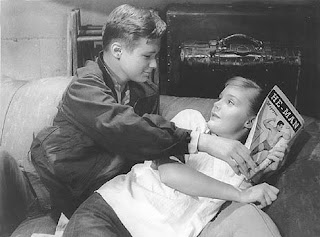 I’ve written about  Blue Denim (1959, a moving and scary film about teen pregnancy, before. I read the play in high school and saw the film once or twice on TV  in the late 1960s or early 1970s. and never forgot it.

Like That Hagen Girl, Blue, Blue Denim has virtually disappeared from public memory. It has never been released on DVD or video. It’s listed in the TCM online catalogue, but I’ve never seen it run there. The film might be available for viewing on the ‘net.

Blue Denim gets short shrift from feminist scholars, too, who concentrate on the abortion narrative and complain about the focus on Arthur’s “coming of age.”  As someone who considers herself a feminist scholar, I find their kvetches short-sighted and as a bastard, annoying..  Professional feminists, of course, rarely consider bastards and our mothers and fathers of much interest or value.anyway.  We’re the crap in their punchbowl.

To make it worse, unlike its bookend A Summer Place,  released the same year, which can qualify as anybody’s guilty pleasure,  Blue Denim  isn’t deliciously smarmy or entertaining.  It’s one of those films that makes me sort of sick to my stomach–even the out-dated parts which aren’t too out-dated  It’s in black and white. It’s like reading The Girls Who Went Away. Its real.

A trailer for Blue Denim weirdly featuring Joan Crawford–with commentary, by film and TV director Allison Anders, is finally up on  YouTube. (Unfortunately,  no clips). I like that she says the film gives teenagers “the dignity of their problems” (What recent mainstream film has done that?)

To put the trailer in context, here is what I wrote about the film previously:

Blue Denim is an important, though flawed, portrayal of teenage sexuality, a subject previously taboo in Hollywood which had portrayed sexually active women as those who knew the score.

Based on James Leo Herlihy’s hit Broadway play, Blue Denim tried an honest and sensitive portrayal of teenage sexuality, pregnancy and family dysfunction through Arthur (Brandon deWilde) and Janet (Carol Lynley) who found themselves “in trouble” after their first and only sexual encounter. The play was hard-hitting and controversial, but the illegal abortion ending was too hot for Hollywood. Blue Denim was toned down, much to the dismay of even conservative Catholic critics who complained that Arthur and Janet’s compulsory marriage should never have happened. A reviewer for the Catholic Legion of Decency was so unhappy with the ending he insisted Janet should have been allowed to reject the shotgun marriage, but keep the baby and to grow into a mature relationship with Arthur.

I pointed out in my original piece that although Blue Denim (and a Summer Place and The Young Lovers) was considered  progressive for their day:

Unlike their predecessors (Madame X films of the 1930s where unmarried women were shown with much more agency), these films, though ostensibly more understanding and liberal suggest that proper sexual relations will occur only within the bourgeoisie marriage bed. Bastardy (or abortion) will not be tolerated. 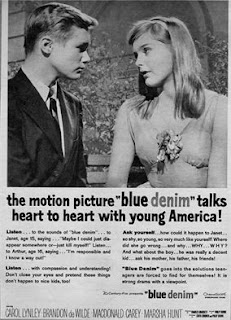 While “nice kids” Arthur, Janet, Molly, Johnny, superficially represent a turn from post-war conservatism, they are simply cautionary tales of youth and its consequences. One expects to see this unhappy foursome a few years down the road, trapped in group therapy sessions after a day at some low-end job. Arthur and Johnny will eventually chuck it all for the Summer of Love. Janet and Molly will collect ADC and food stamps, start keypunch school and wonder what they ever saw in those guys other than their cute dimples and blond surfer looks.

While I was writing this, I surfed around for something to add to this, but there isn’t much.  Happily, though there are some comments on the film–Blue Denim–50 Years Later, on the Remembering Brandon deWilde page.  I’ve been a lifelong fan of Brandon’s who died in 1972 at the age of 30 of injuries received in an automobile accident, so it’s a double treat to find this page..