After 4 soothing days of highbrow adoption talk at ASAIK in Pittsburgh, Bastardette will fly south on her broomstick for the 2-day Ethics and Accountability conference in Arlington, VA, thrown by Ethica and The Evan B. Donaldson Adoption Institute. Monday afternoon (October 15) Bastardette will sit on the Adoptee Access to Records and History: Adopted People and “the ‘Right to Know” panel with records-access legal scholar Elizabeth Samuels, AAC General Counsel Fred Greenman, and moderator Pam Hasegawa. Bastardette is also a member of the informal Meet the Bloggers panel/cocktail reception Monday evening. (I’ll write about that in a separate entry).

Adoption conferences preach to the choir who then return home to practice their hymns some more. While this will indeed preach to the choir, the conference is billed as a working conference with diverse ideologies and solutions (everybody is supposed to feel “uncomfortable” at least once) providing presenters and attendees the opportunity to help “shape improvements “in adoption practice. As such, traditional presentations will be replaced with (no more than) a 10 minute presentation by each panelist. Discussion will then open up to the “public.” At the end of the conference a Town Meeting will discuss ways in which to utilize conference suggestions and strategies for “change.” Of course ethical adoption is an oxymoron, but it will be sort of fun to see who and how many squirm.

Our panel has been charged with the following questions to guide our debate:

It is no secret that Bastardette really really really hates legislation, which she likens to sitting through a college statistics lecture with a toothache. Unfortunately, short of a massive armed takeover of state vital records offices, court houses, and adoption agencies by angry bastards (or newly -elected President Bastardette issuing an executive order to open all records), that’s the only way adoptees will ever snatch their identifies from the vaults of state where they are rudely kept under lock, key, and sealing wax. 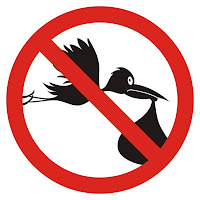 While I think legislation will be a major part of our panel discussion, Bastardette has decided to kick it up with: Kill the Stork: A New Paradigm for Ethics and Adoptee Rights Activism. I’ll discuss such bizarre uncomfortble thoughts as:

In other words: the only ethical standard by which adoptee identity rights can be taken back is through a paradigm shift from kow-towing to the adoption industry, baby stepping, and Stockholm Syndroming to one of class entitlement and personal empowerment. Anything less, while it may make some people feel good about themselves, rejects the adoptee rights doctrine, is self-defeating, and unethical. Leave no one behind! That’s a big portion to serve in only 10 minutes, but I shall try. Sort of like competitive eating.

The speakers list is huge and includes some of Bastardette’s favorites: Michael Colberg, Bill Cordray (right), Madelyn Freundlich, Trish Maskew, Barbara Raymond, Brenda Romanchak–and some kick-ass bloggers. And some of Bastardette’s not-so favorites including a few who are on (or should be on) Pound Puppy’s Demons of Adoption nomination list, the winner of which is scheduled to be announced later tonight.

At some point I’ll probably publish my presentation here; that is, if I get a chance to write it in between “preparing” for back-to-back conferences (hand-outs, kitty-sitting, laundry, packing, and a haircut.) I already bought a new hoodie for the occasion.

I think I’m supposed to have a graphic which clicks on to the conference site, but don’t. So just go here.

Addenda: Bastard Nation is a low-end co-sponsor of the conference. After all, we do stand for ethics! We were informed yesterday that our sponsorship has enabled two adult adoptees, who otherwise could not make it to the conference to speak, to be there. Bastard philanthropy is good! Let out voices be heard!

One Reply to “BASTARDS LEAVE NO ONE BEHIND: ADOPTION ETHICS AND ACCOUNTABIITY CONFERENCE”