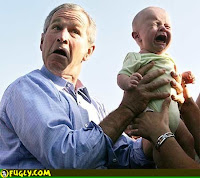 According to today’s Washngton Post, the White House is threatening to veto a change in the Federal Employees Paid Parental Leave Act that would permit federal and congressional employees to receive four weeks of paid parental leave after birth, adoption, or taking in a foster a child.

The Congressional Budget Office estimates that the expanded benefits would cost $850 million between the second half of 2009 and 2013 — about $105 per federal employee per year. It’s “costly and unnecessary” according to Bush’s social welfare and family values brain. Unlike, say, the Iraq War, the War on Terror and TSA.

The bill passed the House 278 to 146 with 50 Republicans voting for and one Democrat voting against it. A companion bill is in the Senate.

RED ALERT:
NCFA’s Tom Terrific Atwood should pitch his tent on the White House lawn on this one. Unless this bill passes and is signed into law, thousands of newborns will remain unadopted–victms of the brutish anti-adoption Bush administration.

19 Replies to “BASTARDETTE TO NCFA: SAVE ADOPTION FROM THE BUSH ADMINISTRATION!”