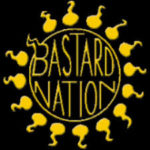 Anti-Black racism is the keystone of White supremacy. It does not operate in isolation or an historical vacuum. The recent murders of George Floyd in Minnesota, Ahmaud Arbery in Georgia, Tony McDade in Florida, and Breonna Taylor in Kentucky are not isolated incidents. Their deaths are the latest iteration of over 400 years of American racist-motivated murder, rape, expropriation, and exploitation where Black bodies have consistently been treated with callous disregard.

Today we see massive justifiable rage across the country against this systemic racism that permeates the United States, exhibited by agents of the state: police, courts, legislatures, schools, and social services.

The Bastard Nation Executive Committee expresses our solidarity with Black Lives Matter and with those in the US and around the world protesting police violence and systemic racism. We support all peaceful protest. We support free expression and the right to address and demand redress from the government. We support self-determination, self- ownership, and autonomy. We support human dignity and civil and human rights.

Every day as adoptee rights activists we confront racism and concomitant classism in the adoption and foster care systems:

Bastard Nation does not and will not tolerate racist postings in our social media or webpage. Racist material and comments will be removed immediately and the poster removed and blocked from further access.

We urge our friends and allies to speak up in person and online as well.

No Justice. No Peace.