Oh Oh! The English language edition of Deutsche Welle, the expat The Local out of Hamburg, and dozens of German language media sources this weekend reported that the German Council on Ethics has called for the closing of the country’s 80 Babyklappen (Baby Flaps/Baby Hatches). In American lingo: anonymous birth and baby dumping.

The babyklappen statement itself is not posted on The Council’s website, so we must go with news reports.

The Local quotes the statement:

But on Thursday the Council said that the hatches, which parents have used to give up some 500 babies so far, should be closed because the most at-risk women fail to use them and they deny children the right to know their origins.

“The German Ethics Council suggests that pregnant women and mothers in emergency situations be aided as much as possible without damaging the rights of others – their children in particular,” a statement said.

But most of the 26-person ethics committee, which includes scientists and legal experts and church leaders, did not agree [with the minority of the committee that opposed the statement.] Some felt that the services created more problems than they solved and even encouraged mothers to abandon their offspring.

“Clearly, this option creates a demand that was not there before,” said committee member Ulrike Riedel.

With dozens of news stories, nearly all in German, it’s difficult for a non-German reader to suss out the whys and whos of the recommendation and the dissent, I’ve Google-translated several but am using English language sources in this entry. Here’s more.

The Local: It has been possible to give up babies without providing one’s name since the 1999s, with around 130 hospitals in Germany offering anonymous births. In addition, there are around 80 baby hatches, warm incubators often in the walls of hospitals, where women can leave babies anonymously who are then put up for adoption.

Advocates of the system say it helps women who might otherwise have their babies alone and could stop newborns from being harmed or killed. Baby flaps, they say, allow women to give up children without leaving them on cold hospital doorsteps.

Deuche Welle: Instead, the council said that women in need should be better informed of the help available to them. It recommended the introduction of a 24-hour hotline for affected women and placements in homes for mothers and children.

The council said that the legality of anonymous adoption was problematic legally because it damages the rights of children to know where they come from.

Here’s some reaction to the recommendation:

The Local (my emphasis): On Friday, the Catholic Women’s Welfare Service, which oversees 19 baby hatches, said the call for change deserved recognition. “

We simply can’t continue this way,” the organisation’s leader Maria Elisabeth Thoma (right) told daily Frankfurter Rundschau, adding that the legal concerns of the Ethics Council were convincing. She encouraged the German government to find a way to insure legal certainty for the mothers and children in such situations. 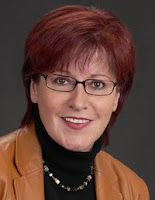 Meanwhile deputy parliamentary floor leader for Angela Merkel’s conservative Christian Democrats (CDU), Ingrid Fischbach (left) told daily Rheinische Post that the country needs a new legislation to protect the rights of mothers and babies. “We want a law that insures confidential birth and improves the counselling services for pregnant women in need,” she told the paper. This law would include temporary anonymity for women who wished to give up their babies. After a limited period of time their information would be handed over to the civil registry office where it could potentially be accessed by their child.

Baby Chums (direct link won’t work with Blogger; go to www.babychums.com and type “babbyklappen in search engine) reported from the Rheinische Post, further (my emphasis):… the party’s deputy parliamentary floor leader Ingrid Fischbach said, “We want a law that insures confidential birth and improves the counseling services for pregnant women in need.” Fischbach stated that such a law would make the anonymity of a woman who wants to giver up her baby temporary rather than permanent. A civil registry office would receive the relevant demographic information of the mother after a short period of time, making it potentially available to the children later.

“We want to create a law for confidential birth and extend the advice for pregnant women in need,” senior Christian Democrat Ingrid Steinbach told the Rheinische Post newspaper.

Back to Deutsc Welle: In the emotionally-charged ethics council debate, those in favor of anonymous services said that there was no better alternative. 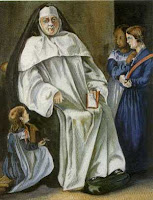 The central committee of Germany’s Catholics said that anonymous births in hospitals saved the lives of children and offered mothers safety and a protected space for the delivery.

“In many cases, the mother subsequently decides in favor of spending her life with her child,” said committee president Alois Glueck.

But while the advocates of Babyklappen say they prevent distraught women from leaving their babies to die in cellars or garbage cans, the critics say they offer women a convenient way of getting rid of an unwanted baby without having to jump through daunting bureaucratic hoops

Not so, said [Katrin” Kliesow [director of the Hamburg based baby saving organization Sternipark]:

“Obviously, we’d rather talk to the women first and offer support,” she said. “The Babyklappe should only ever be a last resort. But these women are having a baby, whatever happens, and it’s first and foremost a question of helping them do so safely, and without risk of legal recrimination.”

Here’s the real kicker: Anonymous birth in Germany is indeed illegal! Here’s a lengthy quote from the same article: (my emphasis) 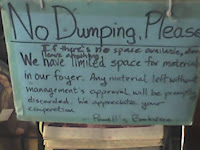 Nonetheless, their defense — well-meaning as it is — also highlights the problems inherent in anonymous birth. Ethical matters such as child’s right to know its parents and a parent’s duty to a child aside, law experts agree the practice is actually illegal, but tolerated.

Every time a hospital carries out an anonymous birth, it’s committing a criminal offence,” said CDU member of parliament Beatrix Philipp, a vocal opponent of the Babyklappen. “By offering this service, you actually create a demand. A generation of foundlings is emerging in Germany, with state approval. It’s time public prosecutors intervened to shut down these Babyklappen and ensure anonymous birth is not legitimized by hospitals.”

Alfred Wolf, a professor of law at the Humboldt University who has written extensively on the issue, agreed.

“What it does is actually encourage women to break the law,” he said. “We don’t even need new laws, we need to enforce existing ones. This is a violation of public order. No matter how desperate these women might be, they always have legal options available to them.”

Sound familiar? Creates a demand that wasn’t there before.

Babyklappen will not go gently into the night. Feminist, socialist, Green, and religious do-gooders seem ready to put up a battle against sane people. And it looks like Catholics are split. This could get interesting. How Germany handles its babyklappen could influence the outcomes in other countries that have started similar NGO programs–especially since each member of the EU has a national Ethics Council. But how much power does an Ethics Council exert? I have no idea.

Look at the picture below and tell me what it is.

When I first saw it, I said, “a bun warmer.” I showed it to a friend who knows nothing about baby dumps in the US or Germany. His first reply was: “the Ark of the Covenant.” Hmm, try again. “A pizza oven.” What do you think it is? 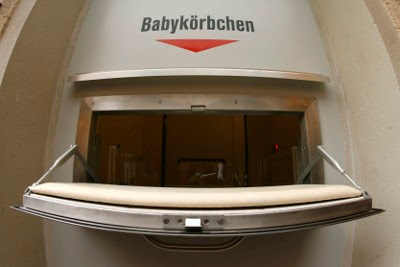