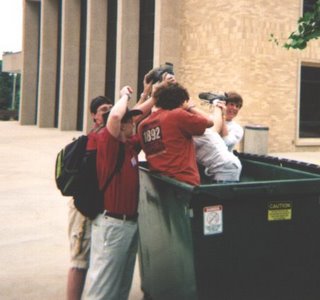 I’m in the middle of writing two cumbersome out-of-control blogs, but this lovely story from the Fort Worth Star-Telegram crossed my screen (relevant parts posted here) that I just had to share:

A woman dropped off a baby Thursday at a southwest Arlington fire station, the first such incident since the city put up signs advertising that parents can drop off unwanted infants with no questions asked.

The 5-pound, 14-ounce boy, only a few hours old, was dropped off about 3 p.m. at Fire Station No. 10 on Southwest Green Oaks Boulevard.

Firefighters looking through window blinds had noticed that a woman had driven into the station’s parking lot, sat in her car for a few minutes, then drove off, said Battalion Chief Mark Reichert.

About an hour later, he said, she came back, walked to the station’s door, handed firefighters the baby in a blanket and said she found him in a trash bin.

Hold it! Hold it! Hold it! Let me get this straight. A woman walks into a fire station, babe in arms, claiming she found it in a trash can, and nobody asks her any questions, not even her name? Nobody attempts to hold her–or even encourages her– to stick around to talk to the cops. After all, she’s a witness to a heinous crime. If this same woman had delivered a 55 year old man to the fire station, claiming she’d found him hanging out of a nearby dumpster, wouldn’t firefighters be a tad bit curious, ask questions, and try to hold her for the police? Wouldn’t she, in fact, as a good citizen, want to talk to police and do her part to see that justice is done? I know I would.

But safe haven laws make all the difference. Arlington firefighters knew that this woman was lying. Yet, she was permitted by law, to lie to them, make a false crime report, and walk out the door with no threat of prosecution.