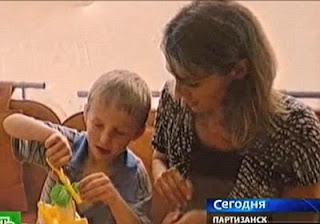 Hansen made international headlines last year when she put her adopted son Artyom Savelyev, 7 (now 9) on a plane by himself with orders to return him to the Russian Ministry of Education, the ministry  that oversees adoptions from Russia. The little boy wasn’t a good fit for her and her overbearing mother.

The World Association of Children and Parents ((WACAP) the agency that placed Atryom with Hansen has brought suit for child support arguing that putting the boy on a plane to Moscow  is not a “legitimate way to annul an adoption.”  Hansen, the agency contends, is still the legal parent,  and  liable for child support payments to WACAP.  Russian courts have also reportedly requested child support from Hansen. According to Monday’s  news, WACAP is asking for a standard 27% of her salary as a nurse, plus back payments.

Hansen’s  (third) attorney, Sandra Smith, had asked the court to exclude the media from hearings because of the Artyom’s juvenile status. According to Monday’s Tennessean Smith argued:

There will be discussion of the boy himself (during the trial). Quite a bit,” Smith said, noting that issues such as psychiatric records and other confidential information will come up in court.

Since that kind of information on juveniles is barred from public access under Tennessee privacy laws, it’s highly unlikely the public would be given a full-blown report of Artyom’s “condition.” As a layperson I fail to understand how Atyom’s mental condition should affect child support in  Hansen’s extra-legal adoption annulment scam. 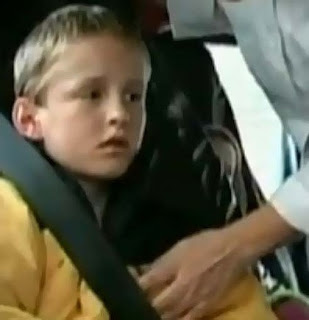 According to the Shelbyville Daily  New Journal, Russell’s ruling permits media access, but will still bar confidential documents,  presumably  regarding Artom’s psychiatric and medical records. from public access.  That is, some documents will remain sealed.

Circuit Judge Lee Russell today ruled in favor of the media request presented by attorney Robb Harvey but said some records about the boy’s family and adoption history would remain sealed. The judge said privacy laws related to such disputes are intended to protect the child involved and do not govern records related to contract disputes between adults. After attorneys agree and he reviews those records they will be released, likely in several weeks, the judge said.

Harvey and attorneys in the suit agreed to work together on deciding which records will be released.

After the hearing, [Larry] Crain (WAPCO attorney) said he has tried three times to get Hansen and her mother to sit down for a deposition to tell their side of the story. Two times, he said, she skipped the appointment and the third time she did not respond to a request to schedule a date.

Incredibly Hansen, through Smith, complains that she gotten a bad deal with the media :

Asked whether her client — who has moved to California and refused all requests for interviews — got a fair hearing in the media, Smith said: “No, I don’t think she did, and why will come out later.

Perhaps this note Hansen wrote to the Russian Ministry has something to do with it: 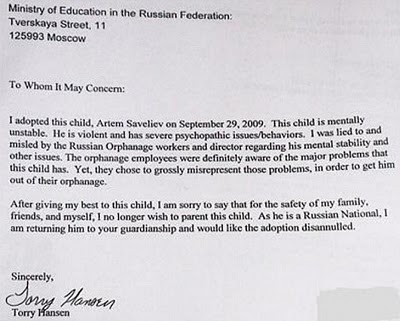 Judge  Russell also ruled that Artyom and the Russian facility in which he now lives can be added as plaintiffs..

Congratulations to the organizations who fought to keep this case open to the public: The Tennessean, the Shelbyville Times-Gazette, The Associated Press, the Tennessee Press Association, The Tennessee Coalition for Open Government, WKRN News 2, WSMV Channel 4 and the Middle Tennessee Chapter of the Society of Professional Journalists.

For more information on Artyom’s  case, please go to the righhand sidebar on Nikto and click appropriate links.