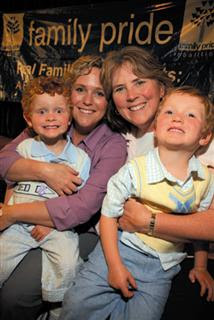 Got this today via the Green Ribbons and Fr. Jack Sweeley: Boycott Adoption.com.

It’s alleged that adoption.com may have shut down its gay adoption forum in reaction to the recent court ruling that the discrimination suit brought against it by gay paps will move forward. I don’t know anything beyond what the press release says, and I’m posting it here for informational purposes only with a couple of observations.

Closing down the “Non-traditional Families” board in order to “avoid” queer adoption issues and look as pure as Lillian Gish makes perfect stupid sense. It reminds Bastardette of when she lived in Albany, Georgia. She was there post-Albany Movement, but the scars on the city were apparent. The park system, though desegregated on paper, was in reality closed so nobody could use it. Better to shut down a public facility than let the N Word push its way on to a picnic table.

The first Mr. Bastadette (Lance Corporal, USMC Bastard to you) and I liked to walk over to the zoo on Sunday morning to watch the alligators feed. I know, but hey…what else was there to do in Albany? One day we decided to take a short-cut through an adjoining park to go home. We were aware that Albany had a Fear of the Other non-functioning park system , but there weren’t any Keep Out signs either. (NOTE: Some downtown businesses still maintained “white” and “colored” entrance and drinking fountain signs to remind the 28,000 local uppities to keep their place despite desegregation orders.) We’ d barely gotten 3 feet on to the grass when we were accosted by one of Albany’s finest– minus the usual cattle prod–screaming that we’d be taken to the slammer if we did not step off taxpayer owned property immediately. Though it might have been visionary for Bastardette to spend time in the same jailhouse as MLK, we decided to obey Officer Redneck and take the long way home. 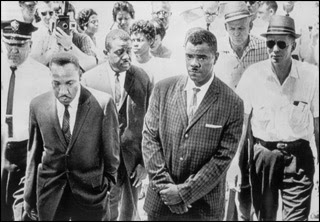 The treatment of the GLBT paps and adopters by adoption.com is hardly in the same league as the events that created the Albany Movement (r MLK in Albany). It would be trivial and insulting to say otherwise. But the reaction of Nathan Gwilliam owner of adoption.com is typical of bullies who “erase” discrimination by creating false “equalization” and “consistency.” (The Washington State ACLU Privacy Project once told Bastard Nation it would support legislation that would seal all birth certificates from the people–adopted and everybody else– whose births they document because nobody over the age of 18 needs a birth certificate anyway.) If we close the parks to everybody then nobody can cry discrimination. If we don’t offer queer forums then nobody can complain that we don’t let gays advertise. You’re not a blip. A dollar short and a day late. Not to mention a brain.

History marches on. The new federal courthouse in Albany is named after local civil rights lawyer CB King. It is believed to be the first federal courthouse designed by an African American architect. And the parks are open for everybody.

Nathan Gwilliam, as the owner of adoption.com has a perfect right to run his business anyway he pleases–even into the ground if it makes him feel good. With its links to BigAdopta, and its purview of privilege, however, the site has been moving toward the slag heap for a long time. Its “discipline” of those who question the adoption industry too critically and of adoptees who advocate identity rights, its bias against first parents, and its weird language rules are notorious. But since we aren’t paying the bills, there’s nothing that we can do about it. A threatened boycott of paps, adopters, and maybe even advertisers and the bad press that will follow might be another story. It’s one thing to get the boot. Quite another thing to pull on those boots and march. This isn’t 1993. There are adoption groups, forums, and lists that don’t neurotically micromanage their members and their opinions in order to fill the coffers and cradles of their benefactors. And if they do, you can always start your own forum.

It will be fun to see how Nathan Gwilliam handles his cash cow’s trudge to the tar pit. Maybe he’ll have to get a real job someday.

For Bastardette’s own dust-up with adoption.com see the Daily Bastardette, August 10, 2005: Gagged and Banned by adoption.com: Russian Memorium “Mocks” Adoptees and Adoptive Parents. 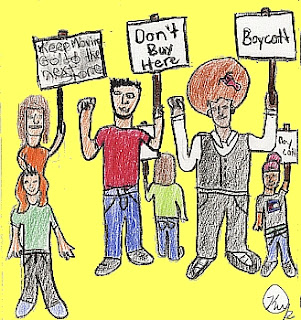 As an adoption professional listed at the American Academy of Adoption Attorneys website, I am writing to make you aware that a growing community of adoptive parents will be boycotting all organizations and companies that advertise at, list themselves at, or are affiliated with the Adoption.com website, owned by Nathan Gwilliam.

The reason? You may not be aware, but with no notice, Adoption.com this week closed down the “Nontraditional Families” Forum. (Nontraditional Families was their “preferred” term for gay/lesbian parents). All the content posted by families at that forum was also deleted without notice. Discussions of the elimination of this forum have been deleted, and moderators are deleting all discussions that relate to this issue in a total censoring of the issue.

At the same time, it has also come to light that Adoption.com has made public the fact that they PROHIBIT PAID ADVERTISING in their prospective adoptive family “Profiles” pages from SINGLE people, or GAY/LESBIAN couples.

Adoption.com’s moves may in part be retribution over a recent lawsuit by a same-sex couple against Adoption.com, which refused the couple the opportunity purchase a paid family profile listing. Adoption.com told the couple that ” Adoption.com does not allow gay and lesbian couples to use their services.” While Adoption.com recently petitioned the court to dismiss the case, the judge has just ruled that the case was not going to be thrown out, and will proceed. ( http://www.nclrights.org/cases/adoptiondotcom.htm )

As a stopgap measure, a new forum has been put up by Adoption.com yesterday, but the extremely restrictive instructions are that members can only discuss “post-adoption support of children” — making it against the Adoption.com rules to acknowledge or aid in any way adoption by gay families or to discuss anything that, as they state, “involves activism.”

A new, non-discriminatory forum away from Adoption.com has been started and hundreds of long-time members — straight and gay, single and married — are leaving the Adoption.com forums for good, due to the discriminatory environment and heavy-handed and oppressive censorship there.

We thought you should be aware that a growing list of people with a conscience in the adoption community will be actively and vigorously publicizing the discriminatory activities of Adoption.com , and by association, those individuals and organizations who provide revenue to the company.

We urge you to contact Nathan Gwilliam and encourage him to change his company’s overtly discriminatory policy.

We urge you to stop any advertising or paid listings at the Adoption.com network of sites until such time as the site fully permits singles and gay/lesbian families full and equal access to all of their services.

We urge you to spread the word to other professionals, so that such discriminatory activities can be eliminated.

Please remember that in business, we are the company we keep. Please don’t expect those of us who are appalled by Adoption.com’s discrimination to value the choices of those individuals and organizations who choose to remain as sponsors/advertisers or pay for listings at the Adoption.com site.