Sunday afternoon. Bored. Too early for a nap? The BBC-America Benny Hill marathon making you edgy? Worried about what to do with that secret pesky baby you’ve been hiding in your over-sized sweats since that Fourth of July whiz-bang in the backseat? Abortion too late? Adoption too difficult? Then you should consider a drop-off at your nearby No Shame No Blame No Name Safe Haven station.

What’s that? You’ve never heard of this new and exciting option the government has created for nice people just like you so you won’t have to trouble yourself setting up an ethical adoption plan for that “unwanted baby? Sit back and relax. Fix a cup of lemon camomille. Then, take a few minutes to enjoy this little Safe Haven PSA Video Fest and learn all about your “safe haven” choice. These instructional videos are fun. They’re entertaining. They’ll make your heart feel as warm as the heart of a pasole pig at the Olympics of Competitive Eating. And at the end of our little festival you’ll know just what to do.

We’ll start with an overview of the “safe haven” program with a nationally distributed PSA narrated by Emmy award winning actress Patricia Heaton. Heaton (who also opposes stem cell research) will explain how easy the program is and how dumping your baby “legally” is “something everyone can live with.”

We then move on to state-specific PSAs. The Quilt, produced by the the New Jersey Department of Youth and Family Services should warm you up. The spot is gentle, non-invasive and reminiscent of feminine hygiene product commercials. And in a way that’s what “safe haven” is. You’ll walk away pure as the driven snow–your problem solved permanently. Nobody will ever know. The New Jersey message is “Don’t abandon your baby”– just plop it on the counter and walk out. We promise nobody will ask you what in the world you’re doing. We trust you. You’re a mother.

Now that you’ve warmed to the comfy idea of leaving your newborn anonymously, you can go on to Baby Safe Haven New England. You’ll learn in more detail just how easy it is to “legally” dump your newborn and protect YOUR “confidentiality.” You will feel relieved that you’ve done the right thing.

The first offering in this entertaining New England selection is called Baby Safe Haven Nicole after the young woman who tells us that she has just had a baby. Although she says she had no place to turn for help, she informs us that a nurse advised her of the local safe haven program. Nicole took the plunge and took the baby to an emergency room. Though she hardly seems to have been a danger to her child, she assures us, “If you can’t keep your baby, you can keep your baby safe.”

The second offering in the New England series, Baby Safe Haven Hotline features a teen couple in a hidden pregnancy–girl with a protruding tummy stuffed into a tight top–calling the BSH-NE hotline. The operator assures her that she has options: “adoption, teen pregnancy programs, and so many other options.” Girl and boy are relieved. Now they can sort it out on the privacy of their couch. 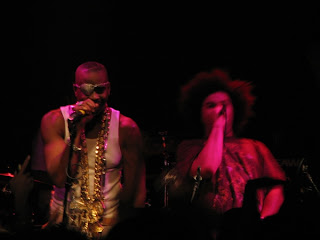 Finally, we are treated to Baby Safe Haven Rap, lyrics written, according to the Boston Weekly Dig, by Buyer Advertising, an ad agency in Newton. The high school performers, reportedly unhappy with the script, attempted to fix the lyrics. The agency disagreed. The song is well… “like the Salt N Peppa’s “Let’s Talk About Sex song…it’s the langauge the 18-24 year old demoraphic listens to” said Elyse Effenson from the agency. Boston rapper MC Exposition (right)was offended by the video, too. “I find it extremely patronizing to assume that the types of people who would have to take advantage of this law are also the types of people who listen to, or would be influenced by, hip-hop music,” he told Dig. But, please don’t let this criticism by those- in-the-know spoil your PSA enjoyment. According to Massachusetts Dept. of Social Service spokesperson Denise Monteiro, 60% of kids surveyed knew about the campaign, and out of that number 90% understood how “BSH” works. After rappin’ with BSH, you will, too!

You should also check out the Caffrey, Cullen, and Noran BSH Rap cover which is much more down with it. After all, Buyer Advertising couldn’t dictate their demographics to indies in messy dorm rooms. Nor would they approve of 4 letter F word versions.

Still not convinced that baby dumping is the right choice for you? Our video festival closes with a hard sell series of three PSAs. “Concepted by” (and yes, that’s what the press release says) ricther7 , these videos were produced in Hollywood for consumption by Utah moms who have inexplicably slipped by the Mormon ministrations of L-d-S Social Services.
SafeHaven Dumpster and SafeHaven Car are moral tales of redemption through dumping; SafeHaven Phone, is a story of spiritual connection between a “desperate mother” and a passerby child, that turns a moment of fright and fear into a life of hope for the future.

Good ad campaigns often spawn parodies and baby dump ads are no different. As an encore, we encourage you to take a moment to review Kevin Anderton’s Spousal Safe Haven. It’s the wave of the future. Babies today. Spouses tomorrow. Neighbors next week.

You’ll notice that the dump choice is ready-made for killer moms. Since it never occurred to you to murder your baby, you’re probably wondering if you qualify for the “safe haven” program. Of course, you do!

This government service is for any parent who just don’t know what to do with their newborn. Murderous intent isn’t necessary to qualify. A couple weeks ago Lisa Durbin, manager of the Kentucky Cabinet for Health and Family Services Child Safety Branch said that 14 out the state’s 15 “safe havened’ babies were actually born to women admitted to hospitals and left there. “We didn’t expect this law to affect so many women who delivered at a medical facility” What did Durbin expect. Has she never heard of Field of Dreams. Has she never watched a PSA?