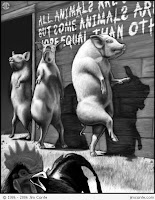 Senators waxed poetic over the “robust” debate in Judiciary a few days ago!
Were they there?

Others praised the bill as “brilliantly crafted.”
Did they read it?

Supporters said, “We are being balanced” by not going “far enough.”
Why do they promote “special rights”

Supporters spoke eloquently about the “restoral of a right”
What about the vetoed left behind?