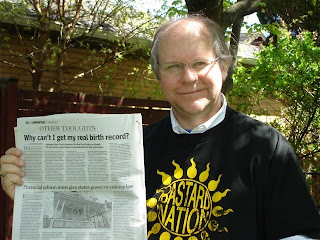 Yesterday, the online (and today’s hardcopy) Chicago-Sun Times published an op-ed piece by Peter Mose, Why can’t I get my real birth certificate? in response to HB 5428. Peter is a member of Bastard Nation’s Executive Commitee.

The piece will go into the Sun-Times paid archives soon enough. With Peter’s permission I’m giving it a permanent home here. It is a clear simple statement, written on a very personal level, Aabout why sealed birth certificates and restricted access is wrong. It deserves wide circulation.

Why can’t I get my real birth record?

On July 15, 1956, I was born in downtown Chicago, at Wesley Hospital, now a part of Northwestern University’s medical complex. I was delivered by a physician named Byford Heskett. It says so on my Illinois birth certificate. It also says my parents were Donald and Ellen Mose of Oak Park. But Ellen never met Dr. Heskett, and indeed she never gave birth to me.

Instead, I was adopted by Ellen and Don Mose from an adoption agency in Evanston when I was 2 months old. The Cradle Society was a prominent adoption outfit back then, as it is today. Judge Otto Kerner Jr. later signed my adoption finalization papers, making the whole transaction legal. That was in 1957, before he became governor.

Also in 1957, the State of Illinois sealed up my original birth certificate and issued a new altered one, the one I carry today. The one that decrees the fiction that I was born to Don and Ellen Mose, and not the truth that I was born to a single mother who bore me in her 30s, after having had a lengthy affair in Madison, Wis.

Somewhere in Springfield, now locked away, is my real first birth certificate. I don’t have it, and it is unclear whether I could get it, even now that my birth parents apparently are both deceased.

Life goes on. At 53, I remain Peter Mose, a classical musician, an educator, an arts journalist. An American living in Canada, someone with two national allegiances — just like I have two identities as an adopted person.

Now, however, comes word from the Land of Lincoln that a new bill has made its way through the Legislature, a bill meant to help me. It’s HB 5428 (sponsored by Rep. Sara Feigenholtz of Chicago and Sen. A.J. Wilhelmi of Joliet), and it’s supposed to allow all adopted adults born in Illinois to reclaim their original birth certificates if they wish.

Except it does not do this. Instead it sets up all sorts of conditions, categories and waivers. If I was born before 1946, for some reason then I’m OK to get one. If not, I now have to give my birth parents a say in the matter, and a veto over me. Where did this odd idea come from? Why can’t I as an adult simply ask for and receive my original birth record from Springfield, just like every other person born in Illinois can do?

Why can’t we in Illinois model ourselves on such states as Oregon, or Maine or New Hampshire?

These more progressive states, along with several others, would view my request for my original birth certificate as an issue of simple, even trivial, civil liberties — i.e., I’m a grown-up American citizen, here’s my processing fee, please send me a copy — not as some complicated dance of balancing my rights against those of birth parents who relinquished me long ago, and thereby relinquished any legal rights they once might have had over me.

If someone could explain this baroque thinking of Illinois legislators to me, perhaps then I could try to explain it to some of the thousands of other normal, unexceptional, law-abiding adults like me whose adoptive beginnings were in this state. We just want our original birth certificates from Illinois’ vital statistics office, like everybody else. Not the state-doctored fictional rewrites.

And we don’t seek adoption reunions; we don’t seek tears on Oprah. We just want a government-issued document that is accurate. It could not be simpler.

Peter Kristian Mose is an arts educator in Toronto, Ontario, and sits on the executive board of Bastard Nation, a U.S. adoptee rights organization.

5 Replies to “PETER MOSE: WHY CANT I GET MY REAL BIRTH RECORD?”