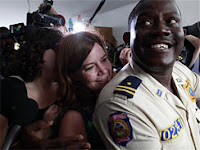 Looks like Laura Silsby won’t be coming some soon. No details yet, but according to the Associated Press:

Judge Bernard Saint-Vil says Laura Silsby has been charged for a newly discovered, alleged attempt to bus child earthquake survivors to the Dominican Republic on Jan. 26.

She already could face trial on kidnapping and criminal-association charges from her group’s attempt to take 33 children across the border without permission three days later.

Saint-Vil has added the new charge of “organization of irregular trips,” from a 1980 law restricting travel out of Haiti that was signed by then-dictator Jean-Claude Duvalier.

Could this be the 40 kids who went missing on the earlier aborted attempt?

Or were there other attempts we don’t know about yet?

How much you wanna bet CVBC and its minions play this: God has placed Mrs. Silsby in her cell of affliction as a witness of His love for the Haitian people, to harvest their souls for His glory. Or this: she’s taking Haiti’s sin on to herself; Haiti’s suffering is her suffering. Or some variation.

Addenda: Baby Love Child has posted a detailed commentary on this new event with background on the gone-missing 40. , Haiti: New charge brought against Laura Silsby Organization on Irregular Trips

29 Replies to “NEW CHARGES: LAURA SILSBY TO REMAIN IN JAIL AT LEAST UNTIL MAY”