News out of New Albany, Mississippi:

The death of 2-year old Guatemalan adoptee Enna Barreto has been ruled a homicide by the Shelby County medical examiner. Her adoptive parents, Janet and Ramone Barreto , have been charged with two counts of negligence, but more serious charges are pending. According to news reports, Enna died in a Memphis hospital from blunt force trauma to the head. She is one of seven children, most from Guatemala, “adopted” by the Barretos. Two others are Janet Barreto’s biological children. The eight surviving children, ages 3-17, are in the temporary custody of the Department of Human Services. They reportedly show no signs of harm, but accusations of sexual abuse are being investigated. The couple is scheduled for arraignment next week.

But this isn’t the whole story. Immigration and Customs Enforcement (ICE) are investigating just how the children got to the US. Officials say that paperwork on five of the adoptions is missing. Neither of the Barretos is employed. They rent out trailers they own throughout the county and they sell puppies…

But this isn’t the whole story. The Barretos sell lots of puppies–as in Internet puppy mill puppies–as in Barreto’s Luv-a-Puppy. Sheriff Tommy Wilhite says (get ready!) 185 dogs, 25 cats, and 1 duck-were found crammed into 67 cages behind the 3-bedroom trailer where the Barretos and the nine children lived. Although a 3-year old girl found at the trailer home weighed only 20 pounds, the animals are reported to have been well fed. Many of the animals were born on top of feces that accumulated on the bottoms of their cages, and insects warmed the pens. Each one will receive a veterinary exam, medical care, grooming, vaccinations and spay or neuter operations. Those who survive will be placed for adoption as soon as possible. It’s too bad, the eight kids will have to wait a little longer. 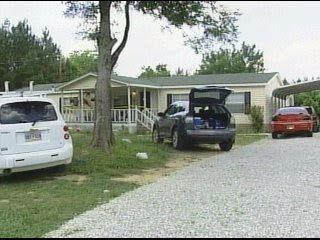 It’s not a huge leap from K-9 kollector to kid kollector, from animal abuser to child abuser from breeder to breeder. If these kids were adopted, how did it happen? What agency, what home study, what “professional” opened the gate? And if they are “illegal” how and why did they get here and what were the Barretos doing with them? The logical step up from the puppy mill?

The link between animal abuse and violence is well documented. According to a 1997 study done by the Massachusetts Society for the Prevention of Cruelty to Animals (SPCA) and Northeastern University, animal abusers are five times more likely to commit violent crimes against people and four times more likely to commit property crimes than are individuals without a history of animal abuse. Go to Pet Abuse.com for more information.

I’m leaving Sunday for a week in California. I’ll try to keep up with this story while I’m gone, but I’m not sure how much time I’ll have to write. There is so much more to ay about this. If anybody finds more, please post it under “comments.” And please, pick this up and spread the word.

Thanks to E Case for the heads up on this story!

25 Replies to “MISSISSIPPI: OF PUPPY MILLS AND BABY MILLS–IF YOU CAN STOMACH IT!”