…and abandoned Sumatran orangutan Silvestre, 11 months, got a trans-Atlantic cruise. The Daily Mail reports that Sly had great time in his 4-bed 1st class cabin he shared with Maribel Bustiamente, his Santilla (Spain) zookeeper who was escorting him to his new home at Monkey World, an ape rescue center in Dorset. He got to meet passengers and crew and swing from table to chair to bunk ladders. The Mail reported that Silvestre was abandoned by his mother after his zoo birth. She “put him down and walked away.” Since then, Silvestre has been bottlefed and cared for by zookeepers. According to Chris Jones, spokesperson for Brittany Ferries, “because Silvestre, was so young and has been separated from his mother, he had to be near his keeper all the time he was traveling.”
Dr. Alison Cronin, director of Monkey World, told The Mail, “At a year old it is a perfect time for him to move in full-time with other orangutans where he can develop physically and mentally with his own kind.”
Now anybody who knows me knows that I’m not into the junk science that imbues contemporary adoption. but I’m fascinated that an 11-month old orangutan gets more consideration regarding separation issues and family dysfunction than do adoptees who just get handed off for a check. Maybe zookeepers should be running adoption.
You rock Sylvestre! And if somebody offers you a pony, jump on it! 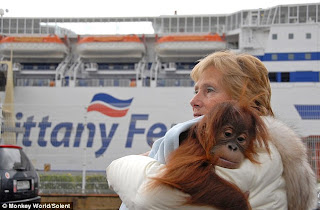 5 Replies to “Life’s Not Fair: I’m Still Waiting for my Pony…”