Accurate personal info, including the religious affiliation, of Jorge Torres Puello is scarce so far, but the question has caught on in the blogosphere: Is Torres Puello really Jewish? Although the relevancy of this question has nothing to do with adoption, the subject of the Daily Bastardette and End Child Exportation and Trafficking…, I’m going to take it on.

No reference is made to Torres Puello’s religion in the interview with his mother and stepfather in the Miami Herald (registration required) or CNN. I’ve heard nothing to suggest he was born Jewish. Puello isn’t a Jewish name, but Torres is. His father is reported to be Puerto Rican and if he were Jewish, it wouldn’t make his son Jewish by birth. There are a couple media references saying that Torres Puello is a Jewish convert, but I’ve not seen any genuine documented source on that. If it is true, when did he convert and who did he convert under? Nobody has come forward to claim him.

We only “know” Torres Puello is Jewish because (1) he says he’s Jewish and (2) he wears a kippah and talit. I have a talit. Does that make me a Jewish man? 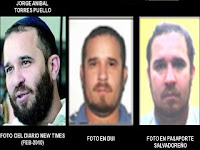 When Did Jorge Torres Puello “Become” Jewish?
We know from various sources including Puello’s mother Ana (Solead) Puello that her son skipped around a lot: the US, DR, Puerto Rico, El Salvador and Canada. (There are now sketchy reports that he spent 18 months in a Canadian jail waiting for extradition to the US and was finally released). Puello and his mother further claim that he spent a year in jail in 1998 for handling funds from drug trafficking (he denies the drug charge) and was jailed briefly between 2001-2002 for a parole violation. I don’t know about the 1998 or Canadian raps, but the 2001-2002 time was not a parole violation,. He pled guilty to attempting to negotiate a stolen Treasury check for $66,000 in Philadelphia using the name George Boyd, Jr.,verified in the February 1-15, 1999 Fraud Awareness Newsletter and his failed appeal for sentence reduction before the 3rd District Federal Court of Appeals.

To makes things more curious, according to CNN (above link):

Given Torres Puello’s penchant for lies and quick change identities, I have my doubts this is true. But if it is, that could explain his relationship with fellow trafficker Pablo Nasser (how would a cheap con artist and common criminal like Torres Puello meet up with the Deputy Director of Immigration?) and open up a whole lotta mess for a whole lotta people.

We know that Torres Puello lived with his first wife Valerie in Plantation, Florida, and that after his 2005 common law marriage to second wife Ana Rameriz, lived in Puerto Rico. He seems, in fact, to have had several “legal addresses” in the last few years, and judging from the picture of his La Liberdad home, he wasn’t hurting for cash.

Harry Ezratty places Torres Puello, aka Jorge Yoram Torres, in Santo Domingo in 2005, where he self-identified as an American Orthodox Jew and ran an internet cafe, though that is information probably furnished to Ezratty by Puello Torres. I have no practical way to research the alleged business.

We know that there is Internet speculation that Torres Puello used the Chabad network to move his traffick. The Awareness Center: International Jewish Center Against Sexual Abuse/Assault posted the following yesterday:

According to reliable sources Jorge Torres Orellana davens (prays) at the Chabad in the Dominican Republic.

No details were offered. Read Twelfth Bough’s thoughts on the subject here. There are a couple entries.

We know that the DR’s small Jewish community is distancing itself from Torres Puello, claiming they never heard of him.

All of these “knowns” bring up the question: Is Jorge Torres Puello really Jewish?

If Torres Puello were a devout Orthodox Jew (by birth or conversion; Dominican or American), wouldn’t he have sought out the tiny Jewish community in Santo Domingo? Wouldn’t he have attended Santo Domingo’s Centro Israelita de Republica Dominicana? Or Chabad? That didn’t happen. Or at least that’s the official story. According to Dr. Ezratty :

Obviously being Jewish, it was inevitable that someone would approach him [Jorge Yoram Torres]. It wasn’t one of the members of the island’s two tiny Jewish communities, but a Dominican who claimed a crypto-Judaic heritage.

By October 2006 when Dr. Ezratty met Jorge Yoram Torres, he had established his Jewish creds and was supposedly “advising” up to 3000 Dominicans who were or believed they were of Crypto-Jewish heritage and holding Jewish services in his backyard. The day Ezratty arrived in the DR, so did a mohel from Brooklyn to perform a bris on Torres Puello’s son. Clearly he’d established his “Jewishness” well before that date.

I can’t imagine that Santo Domingo’s Jewish population was unaware of these backyard activities or other claims and fabrications:

They [Torres Puello’s “congreation”] rallied to purchase a building with a sanctuary, classrooms and dormitories for men and women so that they might observe the Sabbath without traveling. For Hanukah Torres successfully petitioned the government for permission to erect a huge menorah in one of Santo Domingo ‘s busiest intersections. Torres didn’t stop there; he got the government to donate land for a synagogue, a Jewish cemetery and a Jewish hospital. A rabbi has consented to help bring them back to Judaism and possible aliyah to Israel .

Just like there is no Laura Silsby-built New Life Children’s Refuge, there are no Torres Puello-built sanctuary, dorms, or schools. There is no Jewish hospital. There are only two Jewish cemeteries in DR, one in Santo Domingo and a small cemetery at the Sosua Community. Neither of them are new.

Wouldn’t the Jewish community have acknowledged the sudden appearance of a giant menorah in downtown Santo Domingo courtesy of Torres Puello? And who is the rabbi who “consented to bring them back to Judiasm and possible aliah to Israel?”

This recollection, coming from Rudman, a prominent member of Santo Domingo’s Jewish community, suggests that other Jewish leaders were also aware of Torres Puello and were put off by his “conflictive” Messianic complex. Or they thought he was a phony or a nut. Or maybe they weren’t so much. Rudman’s comment calls into question Chabad Rabbi Shimon Pelman’s (right) claim that he’s never heard of Torres Pulleo, especially when it’s been reported from a source the Awareness Network trusts, that Torres Puello davens at Chabad:

Something is up. Maybe Pelman doesn’t know any Jews named Torres Puello because Torres Puello isn’t Jewish. Maybe it’s cover your ass.
=”http:>(And if it is “real” it’s a prop and still a scam.)=”http:>Why would DR’s 400 Jewish citizens need a Jewish city, or another school? Planting synagogues sounds a lot like evangelical work, not what Jews with rap sheets do.

The purpose of the Sephardic Orthodox Jewish Council of America (and I’m guessing the Puerto Rican, and Salvadoran organizations, which I can find no legal documents for, and the DR organization whose papers the New York Times has seen) is interesting because it seems charitable, though it is registered as a for-profit. The council would:

It sounds like the “grandoise plan” for the Jewish city was getting a paper makeover to look legit and rake in the dough. Or something. =”http:>

A couple of small points
=”http:>

=”http:>Besiyata Dismaya,” the Sephardic/ Aramaic version of “Bet Hay/ B’ezrat Hashem” (with the help of G-d) is supposed to be on the upper right hand corner of the page. It precedes any written or printed word. His web page has it in the wrong place. Not a biggie, but an observant Jew with an Orthodox education would know that.

Also, would a devout Orthodox Jew have a common law wife? I thought the Talmud forbade that or at least greatly frowned on it.

Who’s scrubbing wiki:
Somebody has been busy scrubbing references to Jorge Torres Puello off of wiki. As I noted Sunday, the reference to “Jorge Yoram Torres” disappeared in midstream on the wiki entry for “Luis de Torres.” Now, he’s gone from wiki’s “History of the Jews in El Salvador.” The Sephardic Orthodox Council of North America has gone missing from “History of The Jews in the Dominican Republic”

As of this writing:

Jorge Yoram Torres, remains in this cache from “Spanish and Potuguese Jews” under the “Other permanent personalities” list.

The reference to The Sephardic Jewish Orthodox Council of El Salvador remains on the Spanish and Portuguese page.

I don’t have time right now to try to figure out who’s cleaning up Jorge’s mess.

Jorge Torres Puello is a creature of his own creation, reinvention, and destruction. The question of his religion is irrelevant and a distraction from the real issue: the trafficking of women and children for sex, servitude, and adoption and the part he plays in the Silsby setup. (Nothing turns on a Baptist woman more than trying to convert a Jewish man). But it is also relevant, if he is using his “religion” to con rip-off and exploit his victims, co-religionists, and the rest of us, and is using a corrupt network to move his “goods.” If he is indeed using the Chabad network to smuggle people, (I just don’t see enough evidence right now, but I am convinced there are many layers of corruption here, it it can get legs) then we are sitting on a big big story that goes deep into all kinds of governments and black ops. Torres Puello’s alleged work with the DEA and Homeland Security, if true, puts a whole new spin on things that leaves the Silsby Gang in the dust.

I don’t believe for one moment that Torres Puello is Jewish. But I do believe he is quite capable of “being Jewish,” (like someone is capable of being Catholic or being Norwegian); that is, deconstructing an identity and building a new persona for a big haul. It’s play acting. It’s fun. Why he would pick Judiasm, I have no idea, but as another commenter pointed out tonight, “Perhaps he passed his time in jail reading about Judaism, and decided to grow a beard and buy some Kippot/ Yamelkahs to assume a new identity.” I was thinking that myself. I know someone who did that in prison, only he actually converted and became a huge pain.

Whatever is going on is messy. It’s about money. And it reeks.