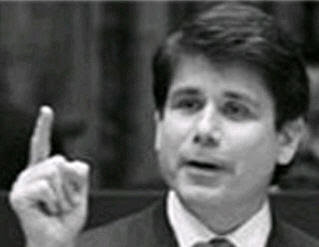 Here’s a snip from CNN:

Each was charged with a count of conspiracy to commit mail and wire fraud and a count of solicitation of bribery, authorities said.

The government says the two were “conspiring to obtain personal financial benefits” for the Illinois governor by leveraging his sole authority to appoint a U.S. senator to replace Obama…

In exchange for assistance, the governor and his chief of staff wanted the newspaper to fire Chicago Tribune editorial board members who were sharply critical of the governor, the government said.

It alleged the two also sought to obtain campaign contributions in exchange for official actions. Blagojevich and Harris will appear later Tuesday in court, the attorney’s office said. 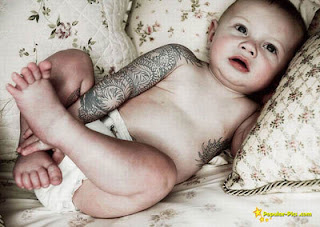 Here is what I wrote about Blago and the dumpers on August 16, 2005, Baby Dump Yes; Tattoos No after the governor vetoed legislation that would permit Illinoisans between the ages of 18-21 to get inked without parental consent. Earlier he’d made permanent the state’s baby dump law two years before it was up for sunset. In his veto of that tat bil Blago fussed over the lifelong harm tats could cause young adults, especially his daughters, then 9 and 2. Apparently giving birth in a seedy motel and anonymously dumping your baby (if you survive) to the state isn’t so harmful to young adults or his own underage daughters as getting a tattoo.

As a parent, I don’t want my daughters to rush to get tattoos on their 18th birthday. At that age, most kids are still in high school and dont’ have judgment or perspective to decide on something as permanent as tattooing your skin. Teenagers may not realize getting a tattoo is a decision they’ll live with and potentially regret the rest of their lives That’s why I refuse to support legisation that allowed a teenager(s) to get tattoos.”

In BlagoLogic it’s better for his daughters to get knocked up, keep it secret, have no prenatal care or counseling, give birth in a bath tub in a cheap motel in Cicero (or better yet, the Executive Mansion), and drop it off at an ER so he’ll never have to know… than get a tat they might regret for the rest of their lives.

In BlagoLogic it’s better for his daughters to risk life-threatening pregnancy-related disabilities including infection, breech birth, placenta previa/acceta (which can require a C-section delivery), preelampsia, toxemia, pregnancy-induced hypertension, hyperemesis. post-partum depression, or psychosis…and death… than get a tat they might regret for the rest of their lives.

In BlagoLogic it’s better for his grandchildren to suffer from cerebral palsy, mental retardation and delay, blindness, diabetes, and hyperlipidemia, short life spans..and death…than their mothers get a tat they might regret the rest of their lives.

Please someone! Why must the state protect teenagers from getting tats, but encourage these same teenagers to have a secret pregnancy delivery, and relinquishment?

No, I’m not saying there is a connection between the governor’s corrupt practices and Illinois safe haven pushers. The dump folks only have crocodile tears to spread around, and they’re not real bankable, even in the best of times.

But what goes ’round comes ’round. If convicted, Blago will have a lot more to explain to his daughters than why he thinks getting a tattoo is worse than anonymously abandoning a baby. But it’s a start.

ADDENDA: The blogosphere is aspin with the Blogojevich arrest and its implications not only on Illinois politics, but the national scene –much too much to comment on here. Of special interest to everyone (OK, I can’t resist it myself!) is Blago’s designation of Barak Obama as “motherfucker.” You can read the full criminal complaint here.

A lot of special interests and usual and unusual suspects, are going to find themselves in the center of this rat’s nest. Will Blago’s fall affect Illinois current adoption sinkhole, especially the iron hold of the “reunion registry” on the identity rights of adoptees? I hope so.