Missouri Rep. Cynthia Davis (R-O’Fallon) (below right) has pre-filed HB 1237, a “records access” bill in the Missouri House. To no one’s surprise it contains a disclosure veto. And all records will need to be released through the court. This is is progress? Tomorrow is the first day of 2010, not 1957.

Here are the changes laid out in the official bill summary:

The bill changes the laws regarding the release of identifying
information by:

(1) Allowing a court to release it to an adopted adult without the consent of the biological parents in certain instances;

(3) Allowing identifying information to be released if the biological parent is deceased and removes the requirement that the information is necessary for health-related purposes;

(5) Repealing the requirement that the Children’s Division within the Department of Social Services attempt to make confidential contact with a biological parent or adult sibling
who has not given consent of the release of identifying information when a possible match has been made in the adoption registry.

The entire bill is here.

(2) Is known but cannot be found and notified pursuant to section 5 of this act;

The bill is promoted by Missouri Open Records Effort (MORE) and AAC member Carolyn Pooler. I don’t see a webpage for MORE, but its Facebook page is here. Two years ago Pooler caused a big stir when she got into it with Rep. Rep. Connie “LaJoyce” Johnson, sponsor of that year’s attempt, and Johnson pulled the plug. Pooler may very well have had good reason to disagree with Johnson, but unfortunately she failed (as far as I can tell) to ever inform Missourians what it was. So did Johnson.

Then there is current sponsor, lame duck Cynthia Davis. Here is her wiki profile. 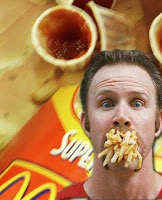 Davis made national news in June 2009 when she attacked a state-funded summer lunch subsidy for poor children (1 in 5 Missouri children fall below the poverty line) claiming that “hunger can be a positive motivator” for getting people to find jobs and that meal programs “could break apart more families.” After lecturing her constituents on the benefits of nutritious home-cooked meals, she suggested that older children get a job at McDonald’s to scarf up free food. Later Davis attempted to backtrack, claiming she’d been misquoted, but her quotes came from her own newsletter. 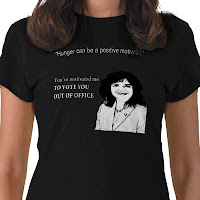 Here are editorial responses from the Warrensburg Daily-Star-Journal, and StLouisToday.com (St. Louis Post Dispatch) to this officious tightwaddery. Even the LA Times got into the act.

Visit msnbc.com for breaking news, world news, and news about the economy

Stephen Colbert suggested that Davis’ political career hadn’t gone beyond the Missouri House due to the “anti-motivating habit of eating.” I tried to embed that video here, but it created havoc on formatting. You can find it here.

Fired-Up Missouri treats us to a 2006 email Davis sent to a fellow Republican regarding sex, contraception, and the poor:

When I was listening to the debate last week I wondered what kind of man would want to enjoy free sex and then expect her to provide for her own contraceptives? These are the kind of men who want free whores. Any man who would be so low life as that does not deserve to have any woman love him. Smart women will stay away from men who use them and abuse them. Why is it that most of the e-mail letters I get on this topic is from men? I have concluded that the chemicals and drugs are their way to have all the goodies and not pay the price. When you encourage this behavior, you create more of it. In other words, if the state starts paying for contraceptives we will have more babies than if we just teach people to not expect free prostitution from poor people. Don’t you think having to pay child support for the next 18 years is a suitable disincentive?

Sound and respected sponsorship is absolutely essential in getting a records bill passed. Missouri Compromisers can’t even come up with that. Is this all bastards are worth? Let this bill rot in committee.

According to Missouri clean-records-bill leader Lindsay Woodside, (see FB page) Open Missouri and the Missouri Adult Adoptee Rights Coalition does not support HB 1237 as currently written. Neither does Bastard Nation.