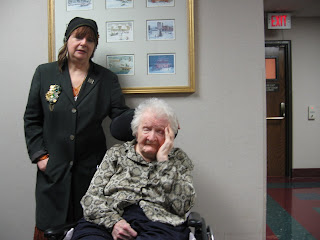 I seldom write about personal business. But this being the holiday season, I’m making an exception. I nicer, kinder Bastardette!

I never had grandparents–to speak of.

On the adoptive side of the family my dad’s mother died in 1952 and my mom’s in 1966 after spending much of her life in state care. (She went crazy in rural Oklahoma and never recovered–a story for another day). Both were in their mid-70s when they died. I never had a grandfather. My mom’s parents were divorced sometime prior to US entry into World War 1 (after my grandmother lost her mind). Much to my mother’s embarrassment, her father ended up married to a tent preacher, a protege of Amiee Semple McPherson. He died in Brownfield, Texas in the mid-1930s. My dad’s father, allegedly a dead ringer (though I don’t see it in pictures) for character actor Cuddles Sakall, died in 1940.

On the bio side, my first mother’s mother died in 1992 and I never knew her. My father’s father died a long time ago.

All that said, Bastardette, at an indeterminate age and due to the “miracle of reunion,” has a real live and kicking grandma. Recently she turned 100.

I’ve only met Miss Violet once. About 2 years ago I visited my hometown to cover an event for the Columbus Free Press. She just happens to live in the “eldercare” facility nextdoor to the event. So, I scooped up my nerve and walked over, asking where Miss Violet might be located. She was not in her room, but with the help of an attendant I found her enjoying her favorite activity–snoozing in her wheelchair–close to the nurse’s station. There I was, face to face with my grandmother, only the third person I’ve ever met to whom I am directly related (half-brothers aside). I thought I had gotten over this reunion business years ago. Everything was so normal. But there, in that hallway, I was having an out-of-body experience. I felt frozen in time. I’d met my past and my future.

Black Jack, my first dad, had warned me to expect the worse. Apparently Miss Violet frequently addresses staff and visitors with an endearing, “You sonofabitch!” Or worse. My aunt, Jack’s sister, assures me that this greeting is not a product of old age. She was always like that. Now I know where my penchant for bad language comes from!

Miss Violet refused to talk to me. I knew she would. Although physically she is in remarkably good condition, her mind isn’t. If she doesn’t recognize Jack, how would she understand who I am? I told her anyway. She had no idea what I was talking about. Mainly she made me feel like a pest. When a nurse suggested I wheel her around a bit, Miss Violet swatted us. She wanted to sleep (or be left alone). I wanted to burst into tears and simply look at her. I thought, “This is the oldest person I’ve ever seen. Ever.” She was the oldest person I’d ever seen. And I couldn’t take my eyes off her. My grandmother.

I wanted to know all about Miss Violet. She was a young grandmother. Jack was a teen dad. Nobody ever bothered to tell him or her about me until decades after my birth. Jack says she was “quite a woman” in her prime, but what does that mean? She had a pretty hard, but not the worst, life in Depression era West Virginia. It got better later. She is a Democrat. (Republicans are walking chickenpox.) I think of Jack’s family as the genteel poor, though some of his relatives were and are quite wealthy. Tonight Jack mentioned to me that when Miss Violet was 15 she flipped over a truck she was driving and it scared her so bad she never drove again. From what I’ve heard previously, this must be one of the few things she was afraid of. Of course, I’ll probably never know much more than scatterings of fading memories. That’s what adoption does: break the chain of memory and history.