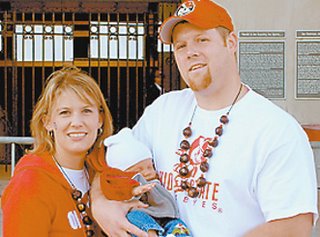 Canton, Ohio is my hometown, an honor non-singing Bastardette shares with Macy Gray, The O’Jays, the late Gerald Levert and Canton Christian School graduate Marilyn Manson. Although Canton was once known as Little Chicago, you seldom hear the town mentioned in the news anymore except during National Pro-Football Hall of Fame weekend. Well, there was that little story that hit the wire last year about Timken High School that embarrassed a lot of people. Over 13% of the female students were pregnant. But we don’t want to go there. At least not today.

Now, to remedy this sad situation, we have Ken and Kristie Sigler, formerly of Canton Actually next-door Louisville. But we don’t want to go there, either. At least not today. Kristie graduated from my alma mater Malone College and Ken worked at Malone as a residence director. Feel the bonding! The Siglers now live in Columbus, and as all good Cowtowners are Buckeye fans, They are 2 of the fortunate 101,568 fans holding tickets for THE BIG GAME! today. 10 rows up at the closed end of The Shoe! Tickets people whore and steal and kill for.

The Siglers are also desperate and childless. (Is that a doll they’re holding at an Ohio Stadum gate?) Or, according to them, prefer to adopt from Guatemala first and breed later in the privacy of their own home. Unfortunately, that decision will cost them $30,000 through the NCFA agency, Christian World Adoption. With only $12,500 down to get the paper work going. $12,500??? I can get a whole basement remodeled for that. But we don’t want to go there. At least today. 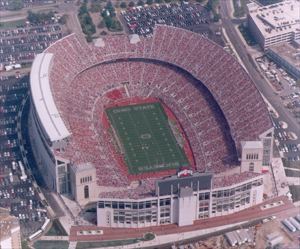 What’s a pap to do?
Why, sell the tickets, of course.

This is where the press comes in.

With the national championship on the line, the Siglers decided the best market plan was eBay. Sports writer Todd Porter, in a tie-in for National Adoption Month, broke the story on the front page of Tuesday’s Repository. And then it hit the wire. By Wednesday afternoon the bids were up to $1,550. GOODBYE BIG GAME. HELLO BABY GUATAMALA!

Errr, no. Not exactly. The long arm of the eBay law bitched slapped the Siglers and their auction right off the site without even a nice email warning. You see, the Siglers made the fatal mistake of announcing that funds raised from the ticket sale would go towards their adoption kitty. Oh No!

eBay claims that “charitable auctions” are not allowed due to state and federal regulations. Washington Post blogger Emil Steiner commented, “If they had said the proceeds would be spent buying beer for tailgating instead of defraying the $12,500 cost of processing their adoption paperwork, would that have been allowed?” Well…yes, Emil. Of course, the Siglers could also stand out on the corner of Lane and High scalping for adoption.

eBay’s declaration is ridiculous. It’s doubtful that raising funds to pay for an adoption fall under “charitable.” But more importantly, as I wrote over a year ago in eBaybee and eBaybee Redux (go here and scroll down; blogspot refuses to give me URLs) people openly raise money to cover their adoption expenses all the time They’re dumping old clothes, old LPs and old cutsie-pie adoption kitsch that nobody wants, and CNN isn’t broadcasting those sales.

Maybe the Siglers will have the last laugh. In a follow-up story, they told Porter that since the unceremonious eBay dump, the media has been all over them. By Thursday Ken had appeared on Chicago radio and he and Kristie had done NPR. That night they were scheduled to appear on ESPN’s Cold Pizza and ABC News. CNN wanted them for a live downlink before the game.

In the meantime, the couple went to dreamseats.com to sell their tickets. No word on how they did.

The Siglers better get their bank account full soon if the want to adopt from Guatemala. (They had done mission work together there earlier). This week, in testimony before the House International Relations Subcommittee, Deputy Assistant Secretary of State for Overseas Citizen Services Catherine Barry threatened that the US would suspend adoptions from Guatemala unless the country starts to enforces The Hague. “

Guatemala has long been considered an adoption mill. During the hearing, committee chair Rep. Chris Smith told the panel, “What concerns me is the fact that the privately-run adoption system uses baby brokers to pay birth mothers for their newborns. This affronts the dignity of the baby, the birth mother and the prospective adoptive parents.”

But for today: GO BUCKS! 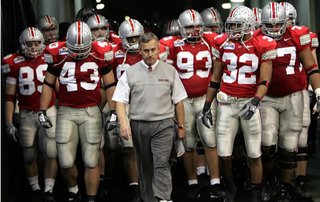 Now Bastardette has to go prepare for her annual neighborhood football riot.