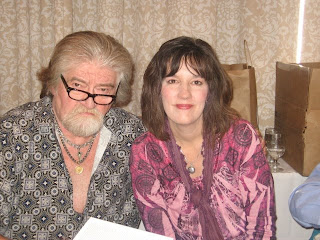 Yesterday’s afternoon keynotes were writer Joe Eszterhas and his daughter Suzanne Perryman, an absolutely socko double reading of their “memoir” (so-to-speak) of separation and reunion: Double Blessing. I’ve been a fan of Joe Esterhaz’ since his days as a crime reporter at the Cleveland Plain Dealer and later an editor and writer at Rolling Stone. and I never dreamed I’d ever meet him. OK, I’m talking like a groupie now, I know. Forgive me Dear Reader, for I have sinned. Joe is the author of The Devil’s Guide to Hollywood and Charlie Simpson’s Apocolpyse (nominated for the National Book Award) and the writer of numerous screenplays including Basic Instinct, Jagged Edge and the ever notorious Show Girls. In 1968 his daughter Suzanne Marie was placed for adoption in Cleveland. 30 years later she located him with the help of Adoption Network Cleveland, co-sponsor of this year’s AAC conference. Suzanne is a writer and advocate of special needs children. Her two daughters suffer from the dengenrative mitochondrial disease.

Joe and Suzanne took turns reading about their lives pre and post reunion, the support they’ve given each other through Joe’s cancer and the illness of Suzanne’s girls, their special bond as father and daughter, and their shared faith. It was an extremely moving but not sentimental presentation, even for mean ol’ Bastardette. This was the first time they have appeared together and I hope it’s not the last.