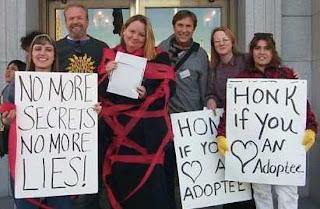 My parents were told by the system that we would get all the information when I turned 18. It was a lie. Instead, I would get non-identifying information. What was blocked out with a black pen was completely arbitrary. An adult adoptee in Marin County got her non-id info on a small index card. It is hard to describe what it is like not being trusted with the facts of my own birth. It assumes as an adult I cannot handle the truth and be trusted to be responsible with it. In the eyes of the government I am either a perpetual infant or a potential stalker.

Also check out BB Church’s latest on the California Catastrophe.

Note on picture: not a single doctor or social worker in the bunch.